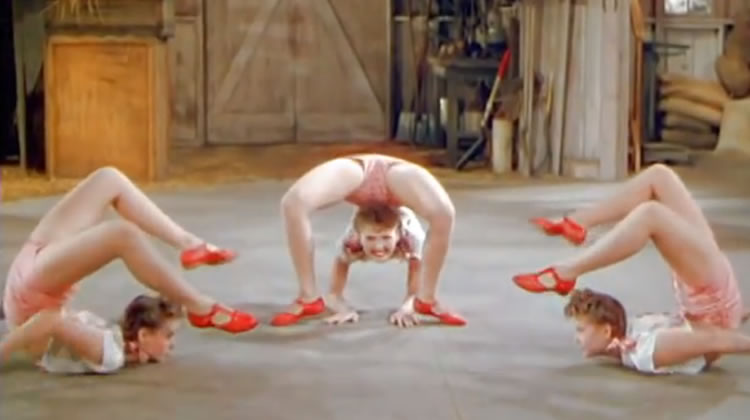 By Christi PeltDecember 12, 2016Featured, The Junk Drawer
No Comments

The Ross Sisters were three, seemingly boneless, Western, sisters who rose to fame in the 1940s. If you’ve never heard of The Ross Sisters, that’s because their level of fame only grew to somewhere below that of Minnie Pearl and somewhere above that of my Aunt Minnie. And yet, they piqued my interest enough to try to find out everything I could about them.

Don’t you hate it when something piques your interest and you can’t find a wealth of information on the topic? (Curse you, Google!) I had hoped to be able to flesh this out into an epic, human-interest story, but, unfortunately, these women lived when “social networking” was considered attending a corn shucking or a church picnic.

So, I’ll tell you what I know about The Ross Sisters. They were a trio of sisters who were born in West Texas, in the 1920s. They made it to the big time in the 1940s by singing and by being more flexible than Pokey and Gumby. They were acrobats and contortionists. I’m not talking about being able to do a few gymnastics moves. They were what you might expect if Ellie Mae Clampett had two sisters and the three of them headlined for Cirque de Soleil. (Are you beginning to understand why my interest was piqued?)

A Ross by Any Other Name…

These three sisters were not triplets, although that was a common assumption. Their given names were Veda, Dixie and Betsy Ross. But, for whatever reason, they gave themselves new (flashier?) stage names. Professionally, they were known as Aggie, Maggie and Elmira Ross. I can only suppose that Elmira was never one to go along with the crowd, or else she might have chosen to be called, “Saggie”.  For the life of me, I can’t understand why they didn’t go with their original names. “Betsy Ross” seems like it would have looked particularly fine on a marquee. But, hey, I’m not a publicist, so I could be wrong about that.

The Birth of the Atomic Wedgie

The Ross Sisters’ really big break came when they were featured in the film “Broadway Rhythm,” in 1944. The film was supposed to star Gene Kelly, but MGM was playing a game of “musical celebrities” and Gene Kelly starred in “Cover Girl” instead. “Broadway Rhythm” starred George Murphy and Ginny Simms. It also featured Lena Horne and Tommy Dorsey, which just goes to show that you shouldn’t get upset if you don’t get top billing in a movie. I had to research George Murphy and Ginny Simms, but I recognized Lena Horne and Tommy Dorsey, right off the bat! But I digress…

In “Broadway Rhythm,” The Ross Sisters performed acts of unbelievable contortion while cavorting about and singing the song “Solid Potato Salad”. Their clip from that movie also appears in the 1994 film, “That’s Entertainment”. It is entertainment! The number has become a YouTube sensation and given Aggie, Maggie and that rebel, Elmira, more exposure than those West Texas fillies could have imagined!

Following WWII, The Ross Sisters moved to Europe, where they appeared in the London stage revue, “Piccadilly Hayride”. From there the story of these Western sisters becomes sketchy. We know that they each married. Aggie had a son. Aggie and her husband made multiple appearances on “The Ed Sullivan Show”. We know that Maggie had two marriages. And we know that the lovely Elmira passed away at the age of 33, in London.

Everything else is left to our imaginations. I don’t know about you, but I sincerely hope that Aggie and Maggie were able to enjoy a little of their YouTube fame.