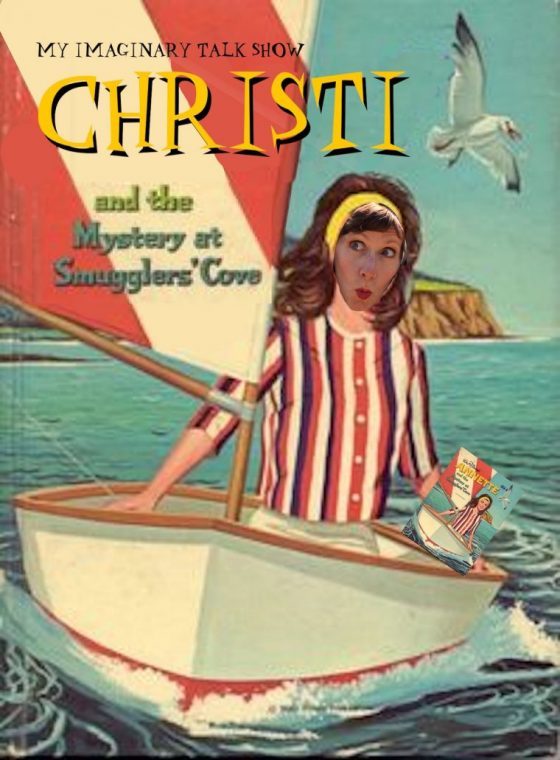 Annette and the Mystery at Smugglers’ Cove

Every talk show host needs a schtick. Even imaginary ones. I mean, Letterman had top 10 lists, Ellen has bad paid for photos, and Howard Stern has… Well, we won’t talk about what Howard Stern has. My Imaginary Talk Show has an imaginary TV PG rating, thank you very much. Still, I recognize my need for a schtick. I’ve decided to do book reviews. But not just any book reviews. Since I love to read, but am generally late to jump on a popular book’s bandwagon, I’ve decided to review “classic literature”. When I saw a copy of Walt Disney’s Annette and the Mystery at Smugglers’ Cove at a flea market, I knew I had missed out on some fine piece of classic literature. Yeah, yeah. I know. Never judge a book by its cover. But I immediately fell in love with the drawing of teenage Annette Funicello in a sailboat. That, and its $2 price tag, made it the perfect selection for My Imaginary Book Club. Annette and the Mystery at Smugglers’ Cove was written prolific screenwriter, Doris Schroeder, who focused on Westerns, such as Hop-Along Cassidy. It was illustrated by Nathalee Mode, who also illustrated such greats as the Family Affair book, Buffy and the New Girl. My expectations for this book were understandably high!

Published in 1963, Annette Funicello was around 21-years old, in real life. That means she was well past her Mouseketeer days and was just entering her “Beach Party” movie days. What better way to bridge the gap between the mouse-ear-wearing crowd and the navel-baring crowd than with a Walt Disney authorized chapter book for kids? With this book, Annette Funicello was doing what Mary Kate and Ashley Olson wouldn’t do for another thirty-five years. Sadly, Frankie Avalon was not a part of this storyline, but it did feature Annette’s friend, Babs, who was staying with Annette at her aunt and uncle’s house for the summer. Babs was “full of fun and as attractive in her blond way as Annette was in her own dark beauty.” (Yes, that is the sort of eloquent word play you can expect from Annette and the Mystery at Smuggler’s Cove.) Also, Babs was not the least bit athletically inclined, and, in that, I felt exceedingly close to her character. There were also a couple of guys (Aren’t there always?)–Rod and Neil. The rest of “the gang” was off doing their own fun summer activities, while Annette, her nonathletic friend, and the two fellows were stuck summering at home in Southern California. Drat the luck! The fantastic foursome planned a luau for their returning friends, but that was just a subplot. The main plot line was revealed when Annette and Babs played a joke on Rod and Neil by “borrowing” their sailboat. The weather started getting rough. The tiny boat was tossed. And a motorboat nearly ran them over and the sailboat boat was smashed. It was touch and go there for a while as poor delicate Babs struggled to get to shore. Fortunately, Annette was practically like Diana Nyad, that lady who swam from Cuba to Miami, and was able to get her puny, dog paddling friend to safety. They ended up at Smugglers’ Cove, but I suppose we all saw that coming from the title. Now for the mystery part. There was this artist living the canyon at Smugglers’ Cove with his wife and grandson, little Pablo. The artist was a real crankpot, but the wife had cookies and spoke in broken English. Little Pablo didn’t say diddly-boo. At that point, the reader didn’t know where the artist’s family was from, but we knew it wasn’t ‘Merica. The girls rested up, accepted a bag of cookies, patted the seemingly mute boy on the head, and walked back home to face the heat over having wrecked the sailboat.

Meanwhile, Annette’s uncle was chatting with a new neighbor who was real dreamy looking. He was also not from ‘Merica. Hmm… Annette’s aunt put the anemic looking Babs to bed, while Annette literally dealt with the wreckage. The boys and Annette went to see if the boat could be salvaged. It could, but it was going to cost Annette $100. That’s $787.10 in today’s money. Um, yeah. So, how were they going to pay for the luau? The artist got crankier. His cookie baking wife got nicer. And little Pablo wasn’t mute after all. The rotten scoundrels from the motorboat showed up looking for something. Something mysterious! Bedridden Babs saw a picture of the dreamy looking neighbor in a magazine and discovered he was from the tiny Central American republic of San Marcos, which is sort of like Genovia from Princess Diaries. Oh, my stars. Señor Dreamboat was none other than the son of the exiled El Presidente of San Marcos! For reals!

The artist got so cranky he was downright rude. The wife stopped dishing out cookies. Pablo befriended Annette. The guys worked on fixing the sailboat. Babs finally got out of bed. The fab four decided to hunt for abalone to serve at the all-important luau. They witnessed a mysterious metal cylinder being dropped by plane into Smugglers’ Cove. The motorboat men couldn’t find it. Neil did find it but kept mums about it. The girls and Rod convinced Neil to turn the cylinder over to Señor Dreamboat, who was, in reality, Señor Scumbag. They discovered that in the nick of time and planned to return it the misunderstood artist instead. Little Pablo’s other grandfather was the exiled El Presidente. Holy, plot twist, Walt Disney! Everyone showed up to the luau, including Señor Scumbag who tried to beat the waddin’ out of Neil and stole a car to follow Annette to the artist’s house. The cylinder actually contained a priceless piece of art, which the good-hearted artist was selling to a museum to provide for the care of refugees from San Marcos. Señor Scumbag was arrested, for kidnapping his nephew, Pablo, and for stealing the car of Annette’s uncle. Yet, for some reason, the artist and the uncle both dropped the charges on Monday.

Oh, and the luau? It was a smashing success. The guests ate the abalone and had no clue about Annette and the Mystery at Smugglers’ Cove.

All in all, this book is an adequate summer beach read.

*All rights reserved. Students, please refrain from using this for your school book report.