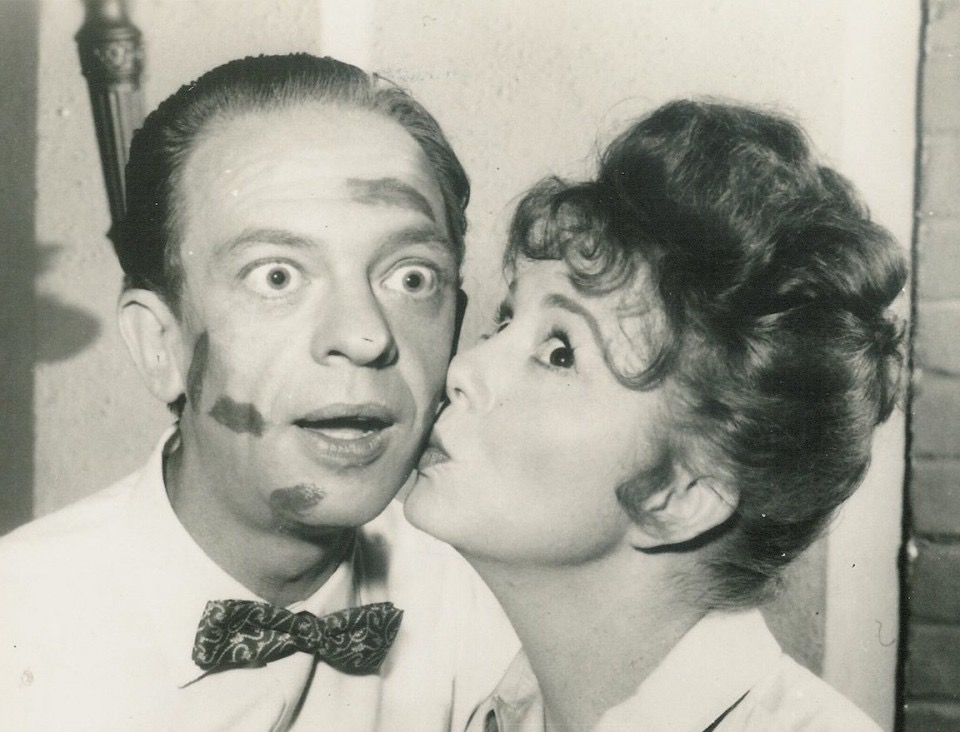 Fans of The Andy Griffith Show know her best as Thelma Lou, the steady sweetheart of Barney Fife, but she occasionally answers to her real name, Betty Lynn. Ms. Lynn adopted Andy Griffith’s hometown of Mount Airy, NC as her own almost a decade ago. It was there, at the annual Mayberry Days Festival, that I had the pleasure of meeting her. Hold on to your hats, Mayberry fans, because this is BIG!

As any good imaginary talk show host would do, I took the time to do a little research on my first very real guest. I discovered my best source of information to be Melvin, the gentleman who took Landon and me on a squad car tour of Mount Airy. Melvin was a wealth of information, as he has been friends with Betty Lynn for several years. One Friday a month, Ms. Lynn spends time at the Andy Griffith Museum, talking to fans and signing autographs. Melvin insists he has never heard a single person in town say anything negative about her. Yes, Melvin, I do understand how rare that is. He said, several times a year, he gets a call from Ms. Lynn asking if he has time to take a drive. That’s a sign she has a visitor in town–normally an actor friend from Hollywood or Broadway. On those occasions, Melvin doesn’t need to play tour guide and point out the local sights. On those days, he just drives and listens. I took a cue from Melvin and did my level best to listen more than I talked, while in the presence of Betty Lynn. She has traveled with the U.S.O., performed on Broadway, starred opposite Robert Young in her film debut, been a co-star to Bette Davis in two movies, and acted in several other films and numerous television shows. But most people want to hear about her days on The Andy Griffith Show, so that will be the focus of this interview. My favorite quote of the evening had to be one made when Ms. Lynn was speaking about her time on The Andy Griffith Show.  The beloved actress said, “I enjoyed every minute of it. Absolutely. Oh, it was glorious! And I’m just the happiest old lady you ever met.” I believe she is the happiest lady I’ve ever met, though, even at the age of 90, she didn’t seem old. Yes, she’s in a wheelchair much of the time because, as she says, she gets tired out if she walks from the car to the front door. Yet, there is a still a childlike quality about her and a sweetness normally only found on black and white television shows. While speaking to her, she grabbed on to my hand, clutched it to her chest and held on for the duration of our conversation. It was like she was saying, “This is your time. Pay no attention to the line of people waiting to meet me.” In case you’re curious, Ms. Lynn has the softest skin I have ever felt.

On Working On The Andy Griffith Show

An interesting fact is that Betty Lynn was never under contract for The Andy Griffith Show. Surprisingly, Thelma Lou, a character who is so well loved and remembered, only appeared in twenty-six of the 249 episodes. At $500 per episode, she wasn’t getting rich, even in the 1960s. But, as Barney Fife said, “You see, Opie, it ain’t only the materialist things in this world that make a person rich. There’s love and friendship. That can make a person rich.”

In that case, the role of Thelma Lou made Betty Lynn an incredibly wealthy woman. Can you believe it’s her?

She said, “We love The Andy Griffith Show, all of us who were on it. We were so privileged to be on that show. And I couldn’t wait when they put a call in for me. I couldn’t wait to go because I loved doing it so much and everybody on it was wonderful. As actors they were all great to work with. And that doesn’t happen every day of the week in show business. I did a lot of movies and things, but the thing I’m proudest of, really, was being on The Andy Griffith Show. And I loved it so much.” It made me smile to learn that Thelma Lou still watches reruns of The Andy Griffith Show each chance she gets. I told her I wanted to bring her some cashew fudge in honor of her birthday. She immediately knew I was referring to the episode entitled, “Barney and Thelma Lou, Phfftt”. In the episode, Thelma Lou teaches Barney a lesson after he tells Gomer he has Thelma Lou in his hip pocket. After she breaks a date, Barney says, “Thelma Lou and I have always had a standing date on Tuesday nights. Every Tuesday night for as long as I can remember we’re setting on that couch, a pan of cashew fudge between us, watching that doctor show on TV.” Ms. Lynn laughed and said, “Would you believe I never have had cashew fudge? I’ve always wanted to try it! I’ve looked for it in candy shops, but you can’t find it anywhere. I’ll bet it’s delicious! I like cashews. I like fudge.”

One of Betty Lynn’s favorite restaurants in Mount Airy is called “The Loaded Goat,” after The Andy Griffith Show episode of the same name. She still gets tickled talking about it.

“Remember where they thought the goat had eaten dynamite and they were all scared to death of it? I can still see the scene in my mind where Andy and Don are leading that goat out of town slowly down the path. It’s so funny!” I’m just going to stare at you for a while, if that’s okay.

“I’m very grateful. And thank you for coming every year that you can. I’ve talked to a lot of people that it’s their first time. Or they came last year and this is their 2nd time. So, keep it up if you can.

“Anyway, it’s all the different things that bring people here. It’s quite interesting, really. And each one of you… I hope you’ll all come back next year. And I hope I’m here next year. That would be nice! I hope you do get a chance to come back and visit in Mayberry, as some people call it–Mount Airy, NC–and come back and visit with us. And I love all of you very much.” The following day, Ms. Lynn spotted Landon at the Mayor’s Proclamation and called him over to her. There, they had their own little lovefest!

Landon said, “I just want you to know how much I love you.”

When he insisted that he loved her more, she said, “You can’t love me more.” At home, Landon confessed that he believed she was right. She loves her fans with every fiber of her adorable being.

Personally, I’ve always thought Barney Fife was a fool to let his steady girl slip through his hands because, to quote him, “Thelma Lou, you’re the cats.” Thelma Lou was the cats, and so is the actress who played her.