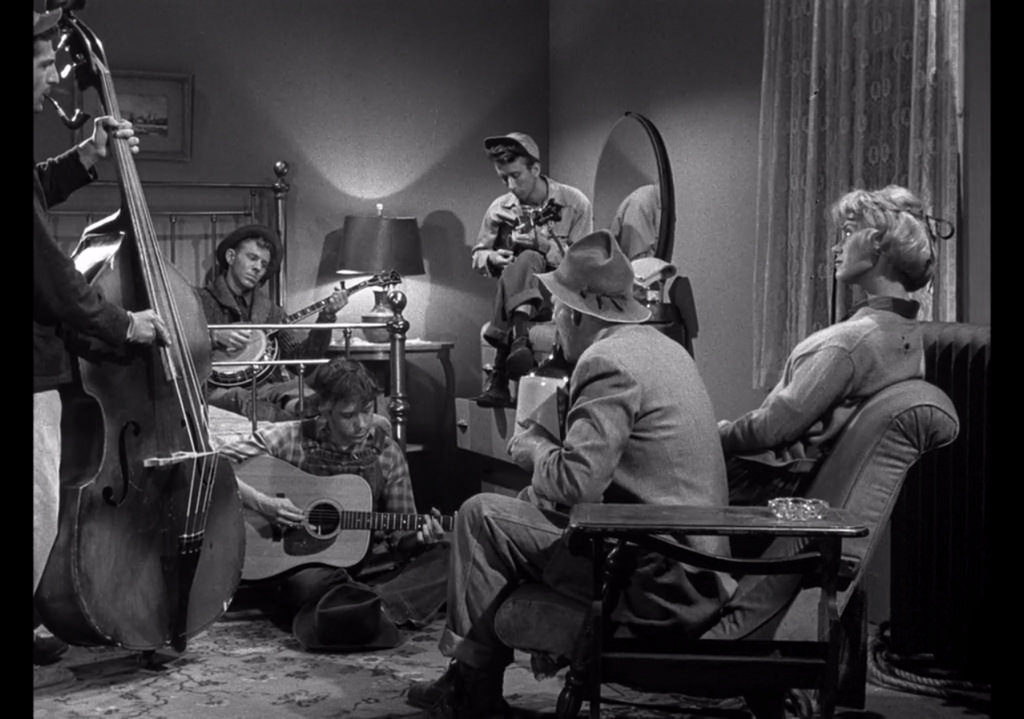 The Darlings From “The Andy Griffith Show”

Thelma Lou (Betty Lynn) wasn’t the only character from The Andy Griffith Show we got to meet when Landon and I took My Imaginary Talk Show on the road. We were hobnobbing with some pretty important Mayberry characters, including a couple of Darlings: Rodney Darling (Rodney Dillard) and his onscreen sister, Charlene Darling (Maggie Peterson). You may not recognize his name, but, if you were a fan of The Andy Griffith Show, you know his music. Rodney played one of the Darling boys who came down from the mountain with their Pa, Brisco (played by Denver Pyle), and their sister, Charlene. “The boys” were played by the real bluegrass band, The Dillards, which also included Rodney’s real life brother, Doug Dillard, Mitch Jayne, and Dean Webb. Rodney was the guitar playing Darling boy whose mouth always hung open like he was trying to catch flies. Like the his onscreen brothers, Rodney never uttered a line–until it was time to sing. Then they let loose with some of the finest bluegrass music you ever heard.

Mr. Dillard was just finishing up his dinner when I had a chance to speak to him. Being the starstruck dork I am I heard myself telling him about how I came to have Meryl Streep’s rib napkin in a box in my attic. Because nothing puts an actor/musician at ease like the knowledge he is dealing with someone with stalker-like tendencies. Fortunately, he laughed and asked if Meryl Streep knew I had her rib napkin. Whew! Encouraged by the fact he didn’t look the least bit scared of me, I decided to gush about his music. Is it just me, or does Rodney Dillard look like he may be signaling for help?

Rodney Dillard wrote many of the songs the Darlings performed on The Andy Griffith Show. Two of my favorites, “Dooley” and “Ebo Walker”, were about people his family knew. In a 1963 episode, the group performed the first nationwide airing of “Dueling Banjos”. A mind-blowing bit of trivia is that The Dillards joined Elton John on his first American tour. Just let that soak in for a bit! They are said to have influenced The Eagles, The Byrds, Elton John, and Led Zeppelin. It was a pleasure to hear about how the group had headed to California in the early 60s with big dreams and empty pockets. Mr. Dillard said, “It’s been really an adventure, all these years. At 19 or 20, I think it was, going to L.A. from the Ozark Mountains, walking into L.A. and rubbing elbows with guys like him (gesturing toward actor/comedian Ronnie Schell). Ronnie Schell and I worked together at a club in San Francisco called The Hungry Eye. It’s been a pleasure to be a part of this (referring to The Andy Griffith Show). It’s done well for me because I’m able to go out and meet folks like you… We do a lot of these things all over the country and there are folks like you all over this country who appreciate what that show was, is and the value system that show represented.”

Knowing that people like to hear about the behind the scenes moments of filming The Andy Griffith Show, Mr. Dillard told a story about Denver Pyle’s knack for making them laugh immediately before a scene, in which they would, of course, have to remain silent and slack-jawed: “We were getting ready to go through the door, pick up Dud Wash, and carry him through the door. It was one of those scenes, ‘Willow branches and whittling knives. Nature’s law. Tooth and claw.’ So, here we were getting ready to go in and they had the camera. We were waiting for them to say, ‘Action.’ And Denver says, ‘You know what? I wasn’t always an actor. No, I was a drummer for one of the Dorsey Brothers. I remember my first acting job. Yeah, I was doing a movie with John Wayne. I had one line. I was to walk out the door, look down the river, look at John Wayne, and say, “Look! Fur Smugglers!” I practiced that line. And the day came, they called, “Action.” John Wayne was standing by the cameras. I ran out on the front porch, looked down the river, pointed, and said, “Look! Smur Fugglers!”’ Mr. Dillard continued, “And at that time, they said, action and we had to go through the door and keep a straight face. That was one of the many stories I remember about doing that show. I just hope you folks continue to watch it to keep it alive. It’s something we need right now in this country to give us some courage and some hope that maybe we can carry this on to our children and give them a little taste of Mayberry in their heart and souls.” Maggie Peterson was just sweet young thing of twenty-two when she made her first appearance on The Andy Griffith Show. Initially, she auditioned for the love interest of Sheriff Andy Taylor, but that role went to Elinor Donahue. In 1963, Charlene Darling, and the rest of her kinfolk, road down from the mountains and into our hearts. Raised with a bunch of almost silent brothers, Charlene talked enough for all of them. She had a crush on the sheriff and didn’t even try to conceal her affection for the lawman (“Pa, can’t I just look at the pretty man?”). Her blonde bob was perfect for swinging from side to side as she sang and danced. It was bubbly Charlene who often sang the lead while her television family accompanied. Two of her favorites were “Salty Dog” and “Boil that Cabbage Down,” though that one made her cry, Pa!  My favorite was “There is a Time”, which was written by Rodney Dillard and Mitch Jayne.

Upon meeting Ms. Peterson, I suddenly morphed into one of her silent brothers, minus the musical ability. I had prepared all kinds of things to say. I was going to talk about her appearances on Green Acres, Gomer Pyle USMC, and The Odd Couple. I was going to ask what it was like to star opposite Don Knotts in The Love God. But, as I stood in front of her, my mind went blank. I was thinking, “Say something clever. Say something clever. Say something!,” That was when I heard myself say, “If we ever get a cat we’re going to name it Andelina.” Smooooooooth, Christi! The Andelina thing was a reference to the name of the baby girl Charlene had in a later season. She looked profoundly amused–sort of like, “That is the all-time dumbest thing any fan has ever said to me since I filmed the show in 1963.” But, as fate would have it, Maggie Peterson is a cat person. She even had an 8×10 glossy available of her with one of her cats. She has four. Yes, that’s the kind of hard-hitting information I was able to extract from her during our time together. There were a couple of other run-ins with Ms. Peterson. One was when she literally ran into Landon outside the amphitheater two days after my riveting discussion about the cat I don’t have, but would name after her fictional daughter. She said, “Excuse me, Honey.”

Later, Landon was walking down main street mumbling to himself about how he had passed eight ashtrays and not one trashcan. Suddenly, he heard the familiar voice of a cat lover behind him. She said, “Oh, I know. I haven’t been around this many smokers since I was filming The Andy Griffith Show.”

At the age of seventy-five, Ms. Peterson is still sweeter’n sourwood honey.