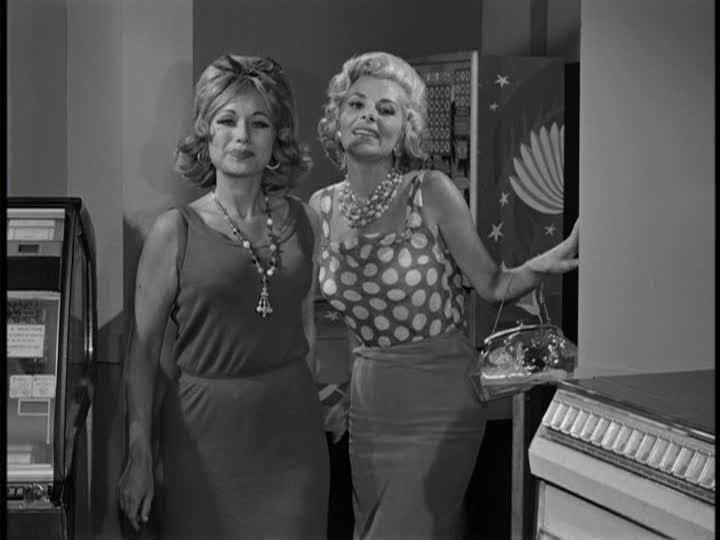 The Fun Girls From Mount Pilot

Fans of The Andy Griffith Show know all about “The Fun Girls” from Mount Pilot. Skippy, with her uniquely asthmatic laugh, and Daphne, who sounded like she began smoking in kindergarten, were man-hungry, bachelorettes determined to show that blondes have more fun. They were wild about dancing and had an obvious attraction for men in uniform, with Skippy nuzzling up to “Bernie” (Barney Fife) and Daphne continually greeting “the sheriff” with her trademark, “Hello, Doll.” The girls caused nothing but trouble for Andy and “Bernie”, but viewers always knew they were in for a good time when the Fun Girls came to town. And, at Mayberry Days 2016, fans were thrilled to see tribute artists of the Fun Girls arrive at the Mayor’s Proclamation on Friday morning. Skippy and Daphne with tribute artist, David Browning, as “The Mayberry Deputy”.

The Fun Girls walked the walks and talked the talks and kissed the cheeks of every man and boy who got within smacking distance. It wasn’t long before there was a sea of bright red lipstick marked males roaming the streets of “Mayberry” (Mount Airy, NC). A story circulated that these Fun Girls were a couple of sisters who simply loved The Andy Griffith Show and decided to dress up and join in the fun of Mayberry Days. It was a good story and one I bought hook, line, and sinker, until…

Saturday morning, Landon and I joined a bazillion other hard-core fans of The Andy Griffith Show for the Mayberry Days Parade. Not unlike the Fun Girls, we had driven in from Pilot Mountain (Mount Pilot), where we were staying, in anticipation of a good time. We arrived early enough to get decent parking places for both the rental vehicle and ourselves. We had prime real estate on both counts. By following a nice couple who had attended the parade last year, our vantage point provided an unobstructed view of the festivities. We could have reached out and touched the convertibles that wheeled by with the likes of Betty Lynn (Thelma Lou), Maggie Peterson (Charleen Darling), and others.

So, when we saw Melvin, the gentleman who had driven us around on our squad car tour two days earlier, we cheered for him like a couple of starstruck groupies. “MELVIN! MELVIN!” That’s when Melvin stopped the car and let us in on a little secret. Not caring that parade participants behind him were stuck idling their cars or marching in place, Melvin asked, “Have you seen the Fun Girls?” When we told him we had, he looked me squarely in the eye and said, “You get to them. Skippy, the one in the bright yellow dress, is Andy Griffith’s daughter. You get to them.” Landon and I thanked Melvin profusely, exchanged a look, and, without saying a word, knew we were going to do whatever it took to get to Skippy!

Surprisingly, no one around us had heard Melvin’s secret in all the commotion. They were probably too busy listening to a barbershop quartet or looking at the truck wheeling around a Jimmy the dynamite eating goat tribute artist. Landon knew that getting to Andy Griffith’s daughter meant he was about to get kissed by the Fun Girls. He handed me the camera and we positioned ourselves to “get to them!” Getting to them meant we practically joined in the parade. We left our bags with our new best friends from the sidelines who were letting us sit on a blanket from their car and headed off to get photos of Andy Griffith’s incognito daughter kissing Landon. In case you don’t know me in real life, I’ll just point out that I am not a proud woman and am most assuredly not above causing a scene if I feel the occasion calls for it. I felt the occasion called for it. Standing a couple of feet away from the approaching parade entries, I started waving my arms above my head like a loon and shouting, “FUN GIRLS!!! PLEEEEEEEEASE, FUN GIRLS!!! OVER HERE!!! PLEASE!!!” At the same time, Landon, who was also screaming, took a step forward, like the sacrificial Mayberry Days lamb that he was. I pointed, to his adorable blond head, and yelled, “HE NEEDS A KISS!!!” Then, sounding a bit like Stanley Kowalski in A Streetcar Named Desire, I bellowed, “SKIPPYYYYYYY!!!” It worked. Skippy and Daphne sashayed over to us and reapplied their red lipstick. I started snapping pictures and Landon got kissed by the Fun Girls. As they were walking off, I looked at the pretty lady in the sunshine yellow dress and softly said, “I loved your father.”

Skippy, whose real name is Dixie Griffith, was momentarily taken aback. Then, seeming to sense that, even though I was clearly a lunatic, I wasn’t going to rat her out to the masses, she collected herself, got back into character, and said, “Why, thank you, Honey! I appreciate that!” You see, like everyone else, Dixie Griffith had wanted to enjoy Mayberry Days and pay her respects to The Andy Griffith Show. I found out she had been asked to show up and sign autographs, but had replied, “Why would I sign autographs? I haven’t done anything.”

We saw the Fun Girls several more times throughout the day. Each time, they were flirting and kissing cheeks. For a while, they positioned themselves near a checkout counter in a store that sells Mayberry paraphernalia. I asked, the young woman running the cash register, “Do any of these people know who she is?”

She replied, “No, and that’s exactly how she wants it.”

That might have been how she wanted it, but, as I looked around at the red lip prints gracing the cheeks of men all over town, it was easy to see that Dixie Griffith made a much bigger impression on Mayberry Days than if she had signed autographs. Skippy, er, Dixie, and her sidekick, Daphne, really are a couple of Fun Girls.