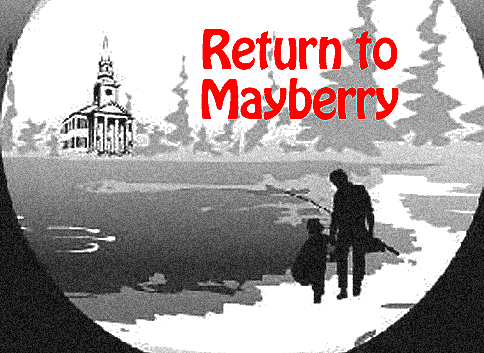 I’ve waited my whole life to say this: If you need me, I’ve gone home to Mayberry! Yep, as I write this, Landon and I are gearing up to head to Mount Airy, North Carolina–Andy Griffith’s real hometown and the inspiration for the fictional town of Mayberry. My vocabulary is lacking the words to adequately express the level of giddiness and nostalgia this brings me, but you just know that’s not going to stop me from trying to tell you.

Growing up, I had two hometowns. There was the town where I lived with my parents, sister, and brother. And there was Mayberry–the hometown I most often visited with my father, while he introduced me to folks like Sheriff Andy Taylor, Aunt Bee, Opie, and Barney Fife. The two towns actually had a fair bit in common, as they were both places filled with people you were connected to in umpteen different ways. It wasn’t enough to just have a neighbor. That neighbor had to also be your old milk man whose son was your butcher at the Piggly Wiggly, and whose other son got his first job working in your family’s restaurant. During my adolescent years when my father wasn’t quite sure what to say to me, we could always talk about The Andy Griffith Show. We’d talk about favorite episodes and his devout preference for the black and white episodes. When I grew up, the show provided me with gift giving options for the man whose hobbies were eating out and “watching Andy”. I gave him VHS tapes, followed by DVDs. I gave him t-shirts with the images of his favorite characters, which he wore to his weekly visits to Sam’s Club. When he was able to work, my father used to plan his breaks around whatever time The Andy Griffith Show  was airing. (He never really did master the VCR or DVD player!) When his health declined and he was unable to work, he sat in his favorite chair with a big bowl of popcorn and passed many hours with his friends from Mayberry. When I visited, we talked about their adventures as if they had just happened for the first time. And, when my father died, there was no better send-off than to have his funeral slideshow set to the theme song of The Andy Griffith Show. Yeah. Anyway, when I heard about Mayberry Days, I knew it was time for me to pay a visit to the home I’ve never actually seen. Of course, Andy, Aunt Bee, and Barney have all passed on. And Opie is now too busy being a huge Hollywood mucky-muck to make it back to Mayberry. But I expect we’ll be passing the time with a bunch of folks who consider Mayberry to be  their hometown, too. We’ll be there, along with my dad’s old Mayberry t-shirts, which Landon inherited. Landon and I have been brushing up on the “family history” by re-watching all of The Andy Griffith Show episodes like you might flip through old scrapbooks before a reunion. It’s like a final exam I’ve been studying for my whole life.  We’re ready in case anyone wants us to sing the Mayberry Union High School song or quote whole passages from episodes. We can recite the “rose poetry” that made Briscoe Darling fall head over heels for Aunt Bee. We know the names and significance of obscure characters like Mr. McBeevie, Johnny Paul Jason, and Ramona Wylie. We have planned this trip with the same enthusiasm some people plan tours of Europe–poring over the Mayberry Days website like it was a travel guide for Italy. We’re ready.

If you’ll notice, this post is under the category ...And Mayhem Ensued. That’s because we’re going with high expectations of a grand adventure. You never know when you’ll run into a goat full of dynamite! Many thanks to my other son, Mason, who has graciously agreed to house sit and keep Geriatric Dog company. Maybe you can go over to the service station, get yourself a bottle of pop, and see if there’s a George Raft movie on TV.

I leave you all with a little ditty Aunt Bee and Clara Edwards wrote for a town celebration. When rock-n-roll singer, Keevy Hazelton, passed through Mayberry, he was convinced to sing it on his television show. It is aptly named, “My Hometown”. And, yes, I know it by heart. Just in case someone asks me to sing it.