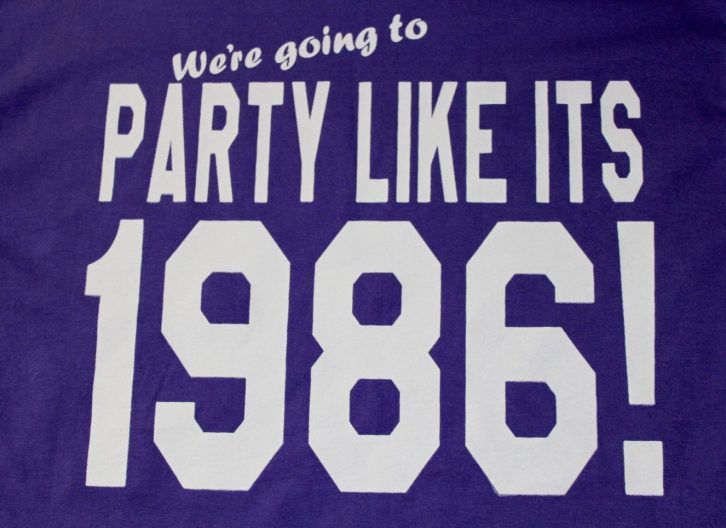 I have watched enough non-imaginary talk shows to know that Monday’s episode generally involves a recap of whatever exciting things the non-imaginary talk show host did that weekend. As much as I want My Imaginary Talk Show to resemble the real thing, I’ve previously ignored this trend because my dinners with Anderson Cooper are few and far between and no one needs to hear about my most recent trip to Target. But this Monday… This Monday I need my imaginary co-host to ask what I did this weekend:

Imaginary Co-host: So, Christi, did you do anything exciting this weekend?

Christi: As the matter of fact, I did. After my usual trip to Target, I attended my 30th high school reunion.

For three decades I had avoided that sort of thing like the plague. I served my time and I wasn’t looking back. It’s not that I disliked high school. I had some good times. For a goody-goody. I had many true friends. I even had my own frienamy, years before the term was coined. I wasn’t bullied (with the exception of one very scary older girl who threatened to beat me up for an entire year). I had my place and it was fine, but I was content to leave the past in the past.

There’s something about 30, though. Thirrrrrrrrty. I received a call a couple of weeks ago telling me of this Homecoming weekend shindig. In past reunion years I lived in other parts of the country, but I’m now only an hour and twenty minutes from the old homeplace. I was fresh out of built-in excuses for not going. In the back of my mind, I thought, “I might go. Probably not. But I might.” I continued my own personal, “Will she? Won’t she?” mental dialogue up until two hours before it was time for me to leave.

We put the class in class. I’m very lucky to have a laid back graduating class, so I threw on something that fit, fluffed up my unfortunate post-chemo “do”, and shuffled off to Buffalo. Having recently been told by my own mother that she wouldn’t have recognized me if she passed me on the street, I was a little leery about walking into the room of people who hadn’t seen me since George Michael was straight.

A good percentage of people did recognize me, which was nice. One old friend, who was familiar with My Imaginary Talk Show said, “You’re going to have all sorts of things to write about. All I ask is that you change the names.” Okay, Schmevin Schmennis, I will change the names! No one will ever crack my code! Walking into a room and seeing a long table surrounded by people you haven’t seen in three decades is like walking in from the sun. It takes a moment to acclimate and begin to see things clearly. What I saw was a shared history that went back as far as kindergarten in many cases. I saw Schmolinda, Schmori, Schmandi (I think she goes by Schmamanda now), Schmonnie, Schmulie, Schmathy, Schmennie, Schmethel, Schmamara, Schmatric, and schmany schmore! People continued to trickle in and, before you knew it, there was quite the little crowd for a graduating class that had fewer than 150 students.

The room was filled with people who were a little older, a bit creakier, and a lot wiser than when I last saw them. The women spent a lot of time discussing hot flashes. The men shared stories of their bad backs, popping knees, and heartburn. We compared notes on what can be done for various maladies. But, the greatest bit of wisdom I gleaned came Schmolinda, whose high school experience was filled with a lot more popularity than my own. You’re going to want to brace yourself for this wisdom because it has the capacity to be life-altering. Are you ready?

Schmolinda said, “I was thinking about what I would like tell my 15-yr-old self. Then I thought, ‘What will my 65-yr-old self want to tell who I am today? Why don’t I just go ahead and learn those lessons now?’”

SCHMAZAM!!!!! There’s some wisdom right there!

When we were taking a group photo, Schmolinda caught herself hiding in the back. Then she thought that her 65-yr-old self might really want a picture of her 48-yr-old self. For the record, I wasn’t hiding. Being in the back row is the lot in life for tall people. Being in the back row, but obscured by other people is the lot in life for tall women who aren’t quite tall enough to stand a full head above the front row. That’s okay. I was there and I have a really cool shirt to prove it Many thanks to Schmori’s husband for the free t-shirts!

For me, I have no doubt that my 65-yr-old self is really proud of my 48-yr-old self for going to a reunion of some of the nicest people she hadn’t seen in thirty years.