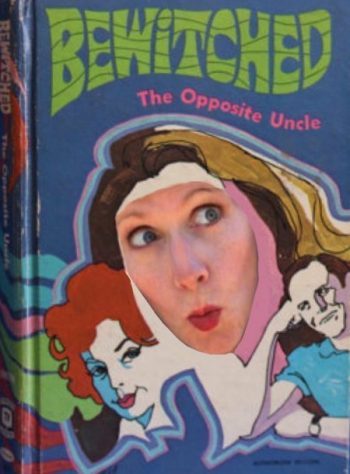 By Christi PeltOctober 24, 2016Featured, My Imaginary Book Club
No Comments

Do you remember the old commercial for Reese’s Peanut Butter Cups where a guy is walking down the street eating chocolate and a gal is walking the opposite direction eating peanut butter? They collided and we heard, “Hey, you got peanut butter on my chocolate!,” and, “No, you got chocolate in my peanut butter!” Fortunately, they discovered chocolate and peanut butter are two great tastes that taste great together. And no one ever seemed to question what sort of young woman walks down a city street slurping up peanut butter from a crock with her fingers. Well, I experienced that same sort of nirvana when I was handed a copy of a 1970 edition of Bewitched: The Opposite Uncle. I thought, “Hey, you got classic television in my book!,” and “No, you got a book on my classic television!” I’m going to let My Imaginary Book Club sort out this one! I was expecting to read an actual episode of Bewitched, but noooooooo. This was all fresh material with many of the characters I know and love. Plus, Darrin, whom I know and tolerate. Because really, what was his deal about not letting Samantha twitch her nose to clean the house or make dinner. I mean, how many times did he expect her to pull a dinner party out of thin air without actually pulling a dinner party out of thin air? We get it. He’s a mortal. A mortal pain in her side who prevents her from doing that super cool nose twitch at will! Bewitched: The Opposite Uncle was written by William Johnston, who was best known for writing television tie-in novels. He also wrote books based on The Flying Nun, Get Smart, The Brady Bunch, Room 222, Happy Days, and Welcome Back Kotter. Is that still a thing because I would like to incorporate my writing with my Netflix binging? Mr. Johnston was also a WWII vet who went to bartending school after he retired from writing–a real renaissance man!

Right off the bat, I knew this book was the real deal. There was Darrin, Samantha, and Endora, as I expected. But there was also Esmerelda, the sometimes housekeeper who disappeared whenever she got nervous. The author did his research on this one–except he consistently misspelled Tabitha as “Tabatha”. Since he didn’t have the benefit of IMDb, I’m not going to hold that against him too much. Samantha and Darrin went to get Uncle Kindly out of the hospital. But Endora beat them to it. Endora talked Uncle Kindly into going on a fling. Before leaving the hospital, Endora told Uncle Kindly to make eye contact with Darrin, in hopes of casting an opposite spell on him. Like Endora, I thought that would have improved Darrin’s disposition, even though you can tell from the cover of the book that we were talking about the preferable Darrin #2. But, noooooo. It turned Durwood into some super driven ad man who snapped at secretaries, talked back to Larry Tate, and practically hung up the phone on Samantha. Samantha found out from a cab driver that he had driven a man matching Uncle Kindly’s description (bald with cotton growing out of his ears) to the Carnival grounds. Samantha twitched her way there. She ran into the man who used to stick his head in the lion’s mouth, but now was afraid of mice and ants.She knew that was the work of Uncle Kindly. I mean, the man was a lion tamer and now he’s a fraidy-cat? Samantha continued on her witch, er, warlock hunt.

Sam spotted Uncle Kindly. Then she lost him again. Uncle Kindly went into a Fun House. But the Fun House wasn’t fun at all. It was a No Fun House. Uncle Kindly looked into a wall of mirrors, and I’ll be ding-danged… The man ZAPPED HIMSELF! Sweet old Uncle Kindly should have been called Uncle Surly! The ironically named Uncle Kindly set off to find the Stephens’ home to “make it into his permanent base of evil operations”! When you expect this book to zig, it zags!

Uncle Kindly hid away in the Stephens’ coat closet, just waiting for the opportunity to zap Samantha. Why? Because Uncle Kindly was evil to the core!

Meanwhile, Darrin #2 was hard at work at McMahon and Tate. He worked on a dog food account for the cranky dog food king, Bull Wangstaff. They came up with some ghastly ad campaign in which Bull held a gun to a puppy’s head and said, “Buy Beefo. Or else!” Yikes! That’s terrifying stuff, right there! Oh, also, Endora learned that Darrin #2 was now her #1 fan. It’s true. Darrin #2 brought Larry Tate and Bull Wangstaff home for dinner. Unannounced. It figures. That doesn’t seem opposite to me. Samantha had a great dinner waiting for them because she was trying to appease her grouchy spouse because he wasn’t really himself. But, really, was he even that different than normal, Samantha? I think not. Long story short, misspelled Tabitha trotted in and out every now and then. Esmerelda faded in every now and then.  And Endora practically broke out in hives because Darrin #2 adored her. Samantha figured out someone was in the closet. She figured out Uncle Kindly zapped himself in the Fun House. She put two and two together and deduced that an evil Uncle Kindly was in the coat closet. There was a momentary giraffe in the foyer, but I’m kind of fuzzy on those details. Sam held up a mirror, opened the closet door, and waited for Uncle Kindly to re-zap himself. He did. Then he zapped the puppy hating Bull Wangstaff into some flower-loving gentle soul. Finally, he zapped Darrin #2, who turned back into his Endora-hating self. Other than that, there was no discernible difference in his personality. I’m team Major Anthony Nelson, in case you can’t tell. If your electricity is out and you want to watch Bewitched, I recommend picking up a copy of Bewitched: The Opposite Uncle. Books and television… Two great pastimes that pass the time great together!