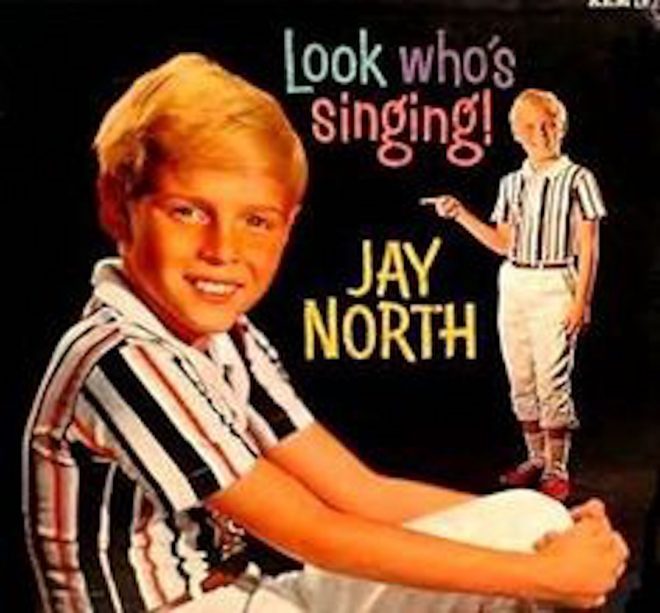 By Christi PeltOctober 14, 2016Featured, The Junk Drawer
No Comments

Enjoy listening to the good, the bad, and the Danny Bonaduce!

… And Jerry Mathers as a singer. Yes, Beaver Cleaver from Leave It To Beaver fame recorded two songs for a single 45rpm. (That’s pioneer talk for releasing a couple of songs on iTunes!) One side of the record was “Don’t ‘Cha Cry,” and the opposite side was this catchy little number, “Wind-Up Toy”.  It was 1962 and the Beav’s voice had that special sound only found in fourteen-year-old boys. If this were on an episode of The Brady Bunch, Greg would have written a new song around Beaver’s voice changing. Still, I’ve got to say, “Gee, Beav, you made a record!”

It seems this foray into the music world did not discourage the adolescent Mathers from having a band called Beaver and the Trappers. Alrighty then!

Look who’s singing! It’s Dennis Mitchell from Dennis the Menace! In 1960, North recorded “The Misadventures of Dennis the Menace” soundtrack stories on LP and this LP album of songs titled “Jay North – Look who’s singing!” He might not have had an amazing voice, but, at nine-years-old, he was still young enough to be adorable. “When I Become a Man” is far less disturbing than hearing Beaver Cleaver sing about being treated like a boy toy.

Yes, Marcia, Marcia, Marcia and Peter from The Brady Bunch recorded their own album. Isn’t that schwell? I’m not sure, but I’m guessing Maureen McCormick had approval over which shot would make it on the cover of the album simply entitled, “Chris Knight & Maureen McCormick”. She looks beautiful enough to play Juliet in a school play, while Christopher Knight looks like he was the one who took a football to the face. Now, I’m not being mean because Peter was always my Brady boy of choice. It’s simply an atrocious picture of him. I’m glad Peter could redeem himself after that whole voice changing fiasco. In “Tell Me Who You Love,” Marcia and Peter proved they didn’t need no stinking Johnny Bravo!

I can hear studio execs now:

Studio exec #1–“Hey, it’s 1973. We should do something cutting edge. We should have that redheaded boy from The Partridge Family put out an album. He is on a show about a musical family, after all.”

Studio exec #2–“But Danny Partridge doesn’t actually sing on the show. He lip syncs just like every cast member except David Cassidy and Shirley Jones. The redhead doesn’t even sync! He just lips. The kid can’t even play the guitar. I’m not sure there are strings on his guitar.”

Studio exec #1–“Why don’t we hire someone else to do most of the singing for him? How about Bruce Roberts? I hear he’s good.”

Studio exec #1–“And let’s be sure and give him at least one grossly inappropriate song for a fourteen-year-old boy. How about “I’ll Be Your Magician”?

Blair from The Facts of Life may have been a spoiled diva, but Lisa Whelchel, the actress who played her, was singing “Good Girl” in 1983. As hard as it may be to believe, her album, “All Because of You” was nominated for a Grammy Award for Best Inspirational Performance. Whelchel lost out to Donna Summer’s “Forgive Me”. It must have been a thrill just to be nominated.

Blair wasn’t the only one of Mrs. Garrett’s charges to head to a recording studio. Kim Fields, star of NBC’s “Facts of Life” (We know that because it says so right on the cover!) recorded two singles: “He Loves Me Not” and “Dear Michael”. Apparently, Tootie was Michael Jackson’s #1 fan. This single made it to #50 on the R&B charts. Way to go, Tootie!

Patty Duke made multiple records, including a couple of compilation albums. She won an Oscar at the age of sixteen for “The Miracle Worker”. By 1963, she was playing identical cousins, Patty and Cathy Lane on The Patty Duke Show. And, in 1965, her first album,”Don’t Just Stand There,” was released. As much as I loved Patty Duke, I might have blamed this one on cousin Cathy!

Noreen Corcoran, who played Kelly on Bachelor Father got that job when future President of the U.S., Ronald Reagan, viewed her screen test and recommended her to John Forsythe. A year after Bachelor Father ended, “Niece Kelly” released her single, “Love Kitten”. This 1963 bubblegum pop song will have you ready to grab your saddle shoes and head to a sock hop.

Holy Jungle Boy, Gilligan! Kurt Russell made an album! His self-titled venture was released in 1971, sometime between making a slew of Disney movies and playing minor league baseball. Oh, and then he made another slew of Disney movies. Kurt, is there nothing you can’t do? Enjoy swooning over his song, “Dizzy”.

Like many celebrities, television’s Webster couldn’t pass up the opportunity to make a Japanese commercial. In the case of the precious Emmanuel Lewis, the commercial was for Clarion stereo equipment. Lewis sang on the 1981 television ad and the song, “City Connection,” made it to #2 on the Japanese Orikon music charts. Lewis gets bonus points for speaking some Japanese in his musical endeavor!