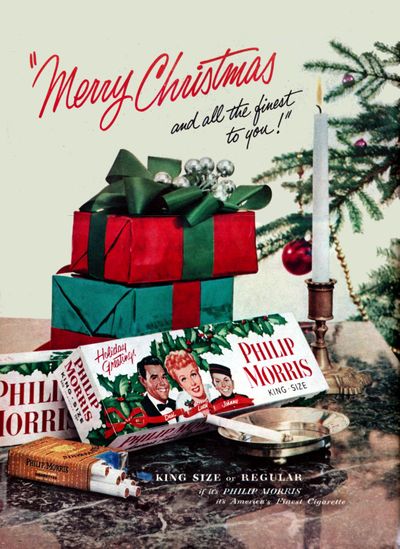 By Christi PeltNovember 25, 2016The Junk Drawer
No Comments

While you’re turkey is still digesting, I thought we’d kick off the Christmas season with some vintage celebrity ads.

Dick Van Dyke promoted The Handle, Kodak’s version of the Polaroid. In fact, this product was so much like a Polaroid that they sued Kodak and the product was removed from the market. Who better than Donna Reed to be the face of Singer sewing machines? The ad also includes other characters from “The Donna Reed Show”. The Lone Ranger (Clayton Moore) and Tonto (Jay Silverheels) want you to buy and use Christmas Seals. Not to be outdone, The Three Stooges’ Curly, Moe, and Larry urged you to buy U.S. Savings Bonds for Christmas.

Sammy Davis Jr. was all about the “plop, plop, fizz, fizz” of Alka Seltzer. Lucille Ball and Desi Arnaz got in on the act by promoting “I Love Lucy” sponsor, Philip Morris.