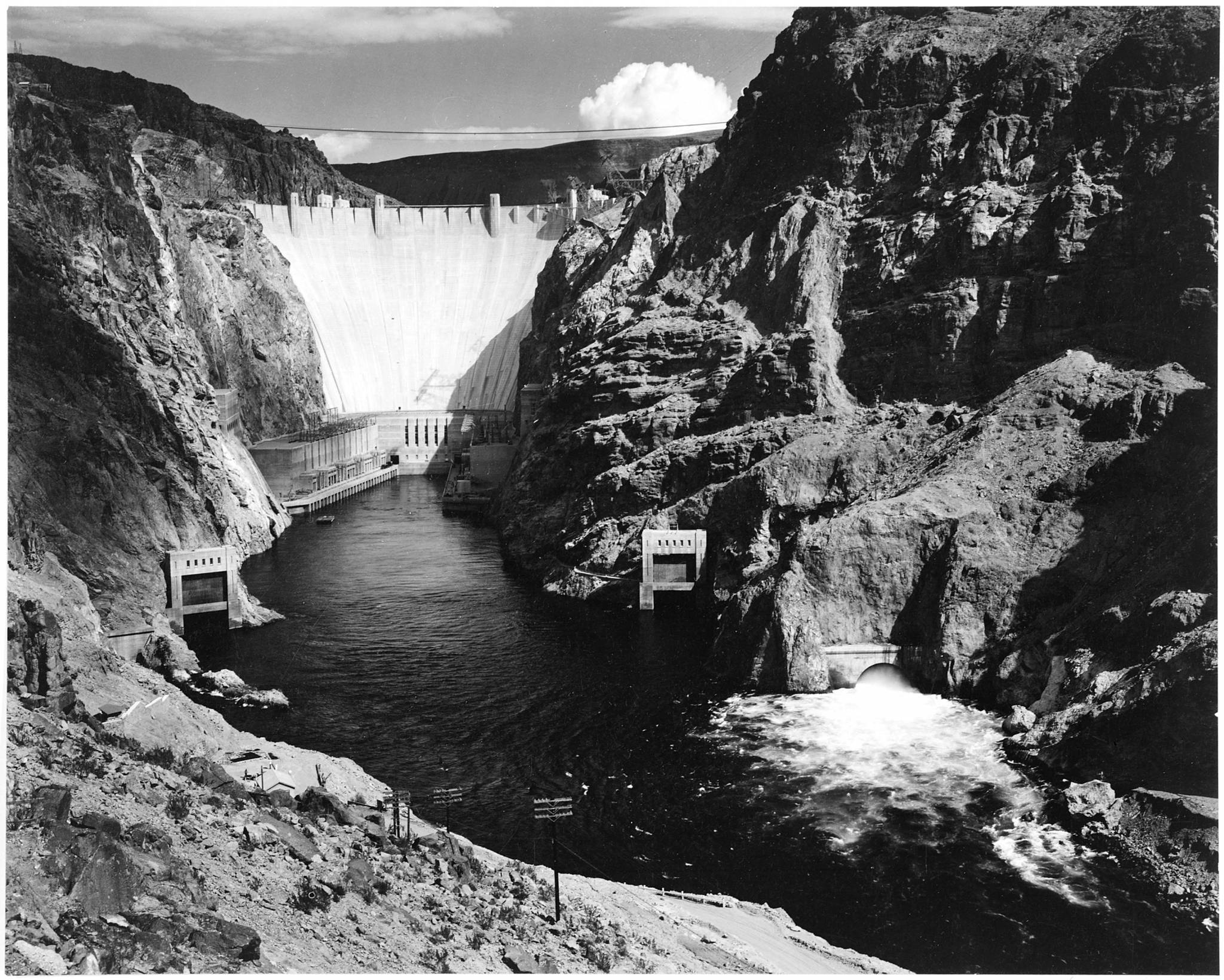 The Great Depression and a Dam Nation

By Christi PeltNovember 9, 2016Featured, The Junk Drawer
No Comments

It’s always darkest before the dawn. Can’t never could. Every day may not be good, but there is something good in every day. Just what makes that little old ant think he can move a rubber tree plant? Oh, yes, the world is full of platitudes about glasses half full or half empty, about turning adversity into opportunity, and about clouds with silver linings. It’s like a big ol’ display of Successories cards.

Today, we’re going to talk about the good old-fashioned American ingenuity that built the Hoover Dam and put thousands of men to work during the Great Depression.

Out, Out Dam Spot!

In July 1930, Congress agreed to fund the construction project, which would ultimately control floods, provide irrigation water, and provide hydroelectric power for a multitude of people in Nevada, Arizona, and California. It was no small undertaking—this plan to harness the Colorado River with a massive concrete structure on the Arizona-Nevada border. Ultimately, it would fuel the development of the sprawling Los Angeles area. They just had to pick a spot for the dam!

The original projected location was planned at Boulder Canyon. Geologists determined that Black Canyon, eight miles downstream, was a more suitable location, but the Boulder name stuck. In the beginning planning stages, the project was known exclusively as the Boulder Dam.

In 1930, Ray Wilbur, the Secretary of the Interior, called the project the Hoover Dam, because of a tradition of naming dams after Presidents. That might have been all well and good if much of the American population hadn’t blamed President Herbert Hoover for their economic woes. When Pres. Roosevelt took office, the new Secretary of the Interior, Harold Icks, declared it would be called Boulder Dam. Up until 1947, Boulder Dam and Hoover Dam were used interchangeably. At that time, Congress passed legislation restoring the name to Hoover Dam. You might say the hard feelings toward Hoover were water over the dam, by that point. When the Bureau of Reclamation selected the location of the dam in 1930, men who hoped to find work on the project pitched their tents along the river. It looked like a primitive version of people camping out in front of the Apple Store in hopes of snagging the latest version of the iPhone. The tent city became known as “Ragtown,” which didn’t sound much better than a Hooverville. The name certainly didn’t do anything to promote a spirit of optimism. So the Bureau of Reclamation decided to take charge of the situation and construct a proper, semi-permanent company town.

Urban architect, Saco Rienk de Boer, was hired to plan the community. De Boer had helped plan Denver, Colorado and went on to design numerous towns around the Rocky Mountains. Like most things the government had a hand in during the Great Depression, this town was supposed to make a statement that the hard times were a thing of the past. The city plans, which allowed for public spaces and lots of lush landscaping, earned it the nickname “Nevada’s Garden City.” This went along with the Bureau of Reclamation’s mission to “reclaim and green the American West.” It seems like ending the Depression would have been an easier task than “greening” Nevada! Boulder City was designed to house around 5,000 workers. You could tell if a worker was a peon or a mucky-muck based on the size and location of his house. If you were deemed to be ultra important you got a house on top of the hill. Middle management made it part way up the hill. If you were some guy doing the grunt work, your house was all the way at the bottom of the hill—far from any public buildings and parks.

The town had a variety of stores, with anyone who wished to open a store being screened for character and financial security. Broke shysters need not have applied! One thing that wasn’t included in the city plans was schools. The Bureau of Reclamation was counting on the town being populated by single men. In the beginning, folks made due with one-room schoolhouses. Eventually, the citizens won the right for the establishment of state funded schools.

Another building was glaringly absent in the early years of Boulder City. There was no hospital. Injured workers had to make the 33-mile trek to Las Vegas Hospital. Even when the town finally got its own hospital, female patients weren’t allowed for several more years.

The city did have Boulder Theatre, which was built in 1931. This was a strategic plan to keep the workers out of Las Vegas and away from its sinful influences. Clean living was highly encouraged. In fact, alcohol was prohibited in Boulder City until 1969 and gambling is still not allowed.

The Boulder Dam Hotel was completed in 1933 to house dignitaries visiting the dam’s construction and to turn the spot into a tourist destination. Everyone from Bette Davis to Pope Pius XII checked into the hotel in 30s.

Construction began April 1931 and was completed in March 1936. In the interim, approximately 21,000 men worked on the project. The most men employed at any one time were 5,251 in July 1934. Average monthly payroll was $500,000 per month, which went a long way toward ending the Depression for individual families.

The worksite was not a great melting pot. Chinese workers could not contractually be employed. The government had pledged to hire African American workers, but no more than 30 African Americans worked on the project at any one time. A few Native Americans were hired for the more dangerous jobs. They worked as high scalers, removing loose rock from the canyon walls with jackhammers and dynamite. Oh, yeah, and they did it while suspended from ropes. According to the Bureau of Reclamation statistics, 96 men died at the dam site during construction. That number does not include the 42 deaths recorded as “pneumonia.” The workers alleged that Hoover Dam “pneumonia” was, in reality, carbon monoxide poisoning in the tunnels, caused by the use of vehicles in the confined spaces. Zero deaths by carbon monoxide poisoning were reported, which meant no compensation claims were paid out for that cause. Something smells a little carbon monoxide-y to me!

All total, workmen removed more than 5.5 million tons of dirt and placed 4.5 million cubic yards of concrete. Hoover Dam is 726.4 feet high at its highest point. It weighs more than 6.5 million tons. At the time, it was the most expensive engineering project in U.S. history, costing $49 million. That would amount to more than $700 million in today’s economy. Columns of the Dam Being Filled with Concrete

On September 30, 1935, President Franklin D. Roosevelt stood before a crowd of 10,000 people who had gathered to see the dedication of what was then the world’s biggest dam. The President’s speech was also broadcast to a radio audience of millions of people, which seems preferable to braving the 102-degree heat! Here’s a bit of Pres. Roosevelt’s speech:

This morning I came, I saw, and I was conquered, as everyone would be who sees for the first time this great feat of mankind. We are here to celebrate the completion of the greatest dam in the world, rising 726 feet above the bedrock of the river and altering the geography of a whole region…

Today marks the official completion and dedication of Boulder Dam. This is an engineering victory of the first order—another great achievement of American resourcefulness, American skill and determination.

This is why I have the right once more to congratulate you who have built Boulder Dam and on behalf of the Nation to say to you, “Well done.”

Friends, that’s what can happen when you see the glass as half full!