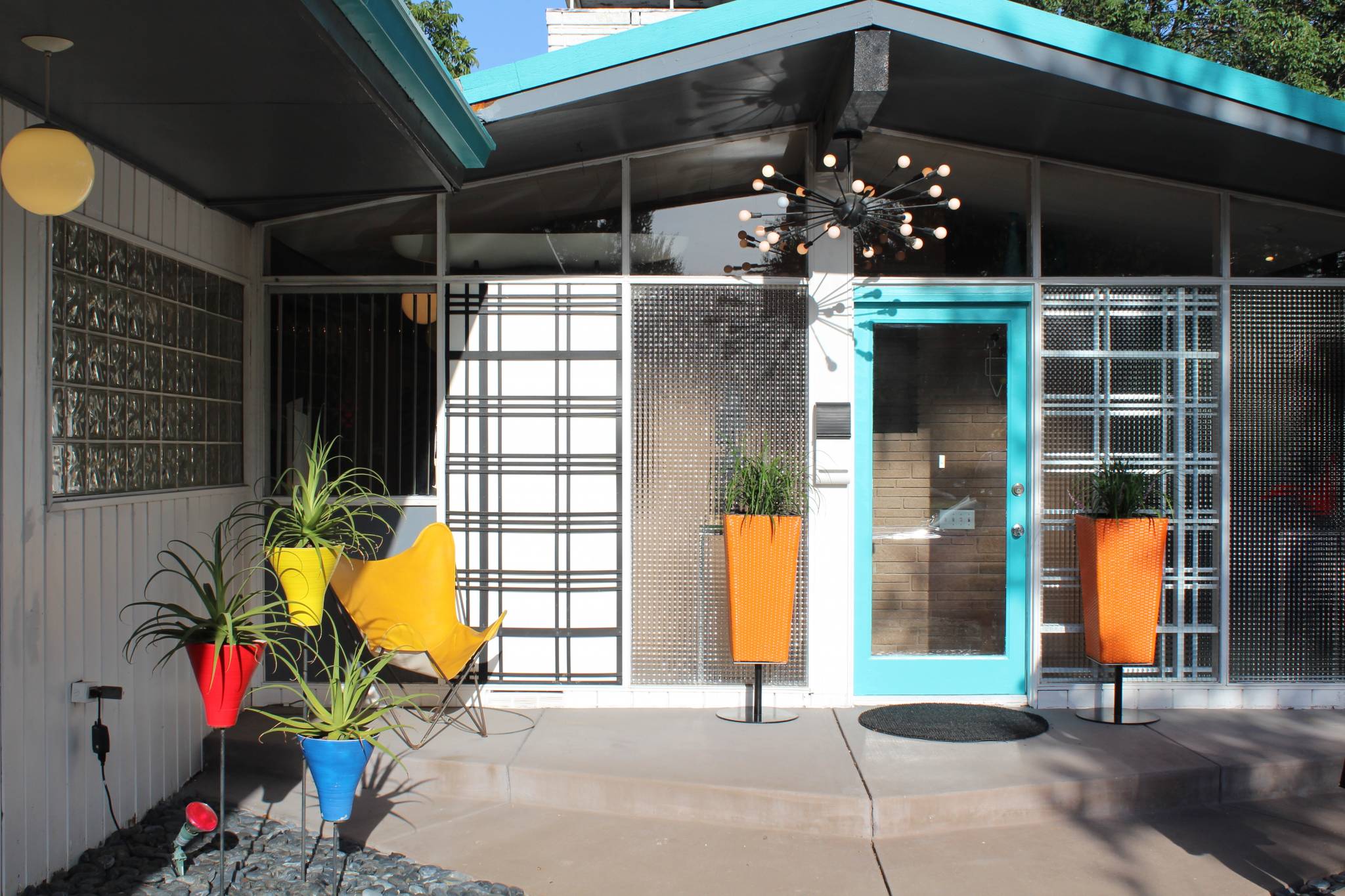 Sometimes a mini adventure falls in your lap. Sometimes that mini adventure means you brave rush hour traffic for a chance to go to an open house of what is surely THE MOST AMAZING MID CENTURY MODERN HOUSE ON THE PLANET! That’s what happened when Landon saw a post on his favorite blog (Hey, no offense taken.), Retro Renovation. This particular post was about the 1954 “Smith House” on Pinocchio Street in Dallas. The world’s most amazing mid century modern house was going up for sale and there was going to be an open house. Well, hot diggity! Many moons ago, prior to being the host of my own imaginary talk show, I worked in Dallas, so I was already familiar with Pinocchio Street. I regularly took a “long cut” home through the charming neighborhood with street names like Cinderella, Snow White, Aladdin, Peter Pan, and Dwarfs Circle. I would gawk at the houses and picture myself bringing a tray of lemonade out to the person mowing my imaginary lawn. (Even in my imagination, I don’t like lawn work.) Once, my car broke down on Cinderella and, in those pre-cellphone days, some kind woman let me in her house to use her telephone. She even let me hang out until help arrived. So, you see, it was almost like going home. Because this was a special occasion, I donned my “pie baking skirt” and threw a scarf around my neck for good measure. (Disclaimer: I do not bake pies, but if I ever learn how to roll out crust that isn’t as tough as a boot, I have the perfect skirt for it.) Landon wore a t-shirt of one of his own Strange Little Onion designs and combed his mop of Buddy Holly hair. We were all set! We knew we had arrived when we saw the same pink Cadillac, which had graced the pages of Landon’s favorite blog. (Hey, not much offense taken.) We were prepared to be told to put the camera away and stop being obnoxious. But, Ed Murchison, the realtor who does the Lord’s work by specializing in mid century modern homes did not tell us to knock it off even though it was glaringly obvious we were just a couple of lookie loos. Other mini adventure seekers turned out for the event, all united in our love of mid century modern architecture and a touch of snoopiness. Honestly, I wish we had all exchanged contact info, because those are my people! This phone put the party in party line! Do you think I can sit on the pretty, pretty sofa? People don’t question you when you bring a big camera and wear a pie baking skirt! Genius! Someone made a photocopy of the fabric to put around the end table. The pink kitchen was scrummy! The orange dining room wasn’t too shabby, either! Check out those chairs! And the light fixture! And the… There’s an indoor barbecue grill! I could make ribs for my best friend, Meryl Streep! I am totally going to frame pictures of toilets for a bathroom! Everyone needs a metal patio umbrella! But, mainly, everyone needs a Bob’s Big Boy! To see more of the amazing Smith House, you can head over to Landon’s favorite blog, Retro Renovation. (Really. I’m hardly offended at all.)